“Since 1913” and four generations, Helfrich Realtors have been helping Evansville families purchase their first home or sell their last, with honesty, integrity and professionalism. Helfrich Realtors is an Evansville, Indiana team of full-time Professional Real Estate agents here to help you with your buying and selling needs. We began by specializing in West Side property in the St. Joe, Perry Heights, USI, St. Phillips, St. Wendel, Mater Dei, Reitz, Posey Co area, but have grown to serve all of Evansville, Newburgh, and surrounding areas in Indiana. 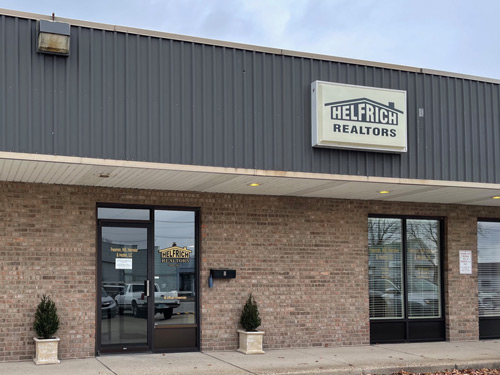 Still going strong on the West Side since 1913.

In 1913 George Helfrich and a group of West Side businessmen from Germany, founded a Building & Loan, Insurance, & Real Estate Firm called West Side Investment Company & Peoples Building and Loan. This is where the journey began.

After WWII, “Jim” Helfrich, George’s Son came to work with his father and other West Side Businessmen. Jim, a parishioner of St. Boniface Church and graduate of FJ Reitz HS was a pilot in the Army Air Corps. He was involved in many community organizations. He served as Fall Festival Chairman and President of West Side Nut Club, the Evansville City Council, Parks Board and Safety Board. He was an avid golfer and clabber player. Always a people person, he could be seen walking Franklin Street and seeing friends and customers. He was with the company for 51 years. He and his wife Bernie had three children, Susan, George, and Sally, who were all graduates of Mater Dei High School. Susan held her Real Estate License but worked as Executive Director of the Evansville Bar Association and was into Antiquing. Sally joined the company in 1983 and has been associated with Helfrich for 36 years. She is married to John Green and has two sons Michael (Emily) and Mark Ritter and two granddaughters. Sally semi-retired in 2019.

George P Helfrich joined the family business in 1969. George served on numerous Civic, State and Community Organizations and has received numerous awards over the years. He has served on the Evansville Parks Department, West Side Nut Club as President, was the first Mater Dei Friends and Alumni President, is a member of St. Boniface Catholic Church, National Association of Realtors , past board member of the Evansville Board of Realtors, served as Governor Bannon’s appointee to the Indiana Real Estate Commission and Realtor of the Year 2007, just to name a few. If someone needs a history lesson or an opinion of how to get something done in the community, George is the one to ask. He has seen it, been a part of it, or has a story of how it got there. George has been a familiar face to many on the West Side and throughout Evansville. He has employed many and has seen countless changes in 51 years, especially in the Real Estate Market.

Among George Peter Helfrich’s children are Jennifer, Stephanie and Peter. All who are graduates of Mater Dei High School as well and have all worked at Helfrich.

In 1963, the Helfrich’s sold Peoples Building & Loan to Permanent Federal Savings & Loan and in 1997, the Insurance Agency was sold to Old National Bank. Through it all, the Real Estate business has remained with family. With progress, like many family businesses, the time comes for change.

Since October 2020, Daughter Stephanie Helfrich Freeman, Managing Broker became the current owner. She has been with the company since 1988. Still located on historic Franklin Street, they will continue to serve the community with their excellence of service.

One thing is certain, the agents at Helfrich Realtors and the business that has lasted since 1913 is still going strong. You will get great service by licensed Agents with numerous years of experience who are part of the National Association of Realtors and the Southwest Indiana Association of Realtors. They will work continuously to guide you through the whole process from the commercial to residential end. Call any of their agents for a free market analysis of your property or for any real estate needs.

THE COMPANY
OUR AGENTS
HOME SEARCH
Scroll to top